A peek inside the bubble!

Diana was at Waihi Beach when the lockdown was announced, quickly making her way back to her home in Northland, Wellington. She shares her bubble with partner Neale.

How have you found your first few days in lockdown?

It’s very quiet, except for the tuis. We don’t hear a lot of noise even though we’re quite close (to Wellington city), but there’s just nothing. At the moment I’m looking down on the sea. I can see the two tugboats coming in, but there are no other boats around at all. It’s also a bit weird that you can’t go and see your friends and your neighbours. When you’re told you can’t do it - even though I might have gone for a day or two without seeing them in the past anyway - you just want to.

What have you been doing to pass the time?

We’ve started what we hope will be a routine. I’m just 70 and Neale is 72, so we were aware of the need to stay home for a week or so earlier (than the official lockdown). We start the morning with a Pilates session - at the moment I’m the teacher and Neale’s the pupil, but he’s remembering some from going to classes years and years ago, so he’s adding in bits. We do about 20 minutes.

We’ve put an old table in the back bedroom for Neale. We started out by thinking we could both work at the same desk, but we would probably kill each other before then. He says I get 40 phone calls a day and he’s sitting glumly looking at his screen - he tends to do the writing and the thinking, and I tend to do the talking to people in the charities I’m involved with. We meet for a coffee in the morning and then back into the office and then meet for lunch.

We’ve decided to try to do something together each day, it could be five minutes, it could be longer. It could be fun - but it’s not allowed to be the television because we do that together at night anyway. The first day we cleaned out our dry goods draw – it hasn’t been cleaned out since the kitchen was altered 10 years ago. Really exciting things like that.

How are you keeping your spirits up?

It’s very easy to get into watching television and just shutting out contact really. So, I’m also going for a walk around the block every day. Neale is more susceptible (to the virus), so he’s walking around the house each day instead. He’s a golfer and he’s rigged up the funniest driving range in Wellington. He’s got a curtain between the deck and the house and he whacks foam balls into it like you wouldn’t believe. He already had a putting green and he’s now got a chipping thing in the corner where he chips into a net and he’s found an old foot stool pouffe and he whacks into that too.

Because we’re both part-time working now we’re already a bit more into (being at home) than others. We try to find one thing to watch together in the evenings, which is rather nice. Because we watch very different things normally.

The positive thing is that we’re all doing the right thing. This might contain (the virus) and let’s hope it does. 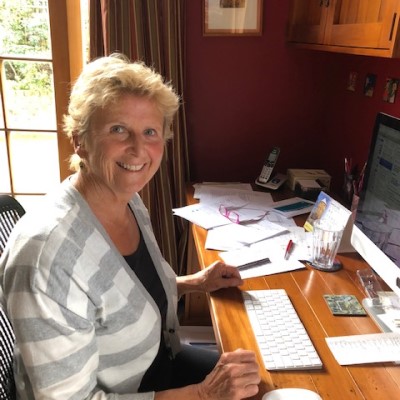 What have you enjoyed most about lockdown so far?

I’ve enjoyed seeing New Zealand take it on the chin and get on with it. I was really worried we would see a lot more people saying they weren’t doing to do it.

And when I go for a walk, a guy walking towards me with a smile walks out into the middle of the road to go around me at two metres, I like that, because he probably wouldn’t even have seen me in the past.

How are you keeping in touch with others?

Neale is doing Grandad hour with his grandchildren. He gives them each a story to read each night and they then talk to him about it (over the internet). I have a list of friends that I’m either texting, emailing or calling and I’m making my way down the list. We’re keeping in touch with a group of people as well as family.

We gave our neighbours some avocados by putting them on a string on the end of a broom handle and then leaning over the railing. They got the avocados dangling down from above. They’re very kindly collecting our groceries for us.

We also have a dinner club with two other couples - we go to a different restaurant once a month that none of us have been to before. We’ve been doing it for 16 years, but we’re to have to miss this month. But I think this time we’ll choose a night and share whatever we’ve eaten on (video conferencing website) Zoom or something.

What are you missing most?

I’m missing walking with friends. Walking’s alright, it’s fine to be out and I’m lucky to be out, but I like catching up with friends. Today I was supposed to be going to the first of the French Film Festival films, I had booked three of those – I particularly like the comedies.

Also, it’s alright having phone meetings with the people you work with, but it’s so much better in person. I’d walk downtown and go to three different offices and catch up with three different organisations I’m working with, I miss all of those.

What long shelved project are you reviving for the lockdown?

We have an old tin hatbox that probably came from Scotland with my mother when she was about nine and she would be 108 now if she was about. It’s full of photos and we haven’t ever opened it really, we just shove things in. So, I’m trying to persuade Neale that one afternoon that could be one of the things we do together. He doesn’t sound all that interested! But hopefully we’ll go through and sort them a bit so nobody else has to do it in the future.

What has surprised you most about the lockdown?

The speed with which everyone took it on. People just went about it. I think (Prime Minister) Jacinda Adern and (Director-General of Health) Ashley Bloomfield and the COVID-19 website have done a really good job at keeping us informed. It’s been very clear – stay at home, stay at home, stay at home. I think the clarity of the communications has been great, and it’s surprised me just how quickly we all did it. 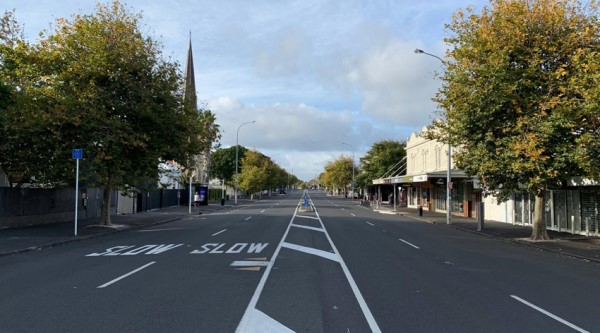