How your thinking changes as you get older

How your thinking changes as you get older

As you get older, the brain changes in both good ways and bad.

IF YOU ARE over 20, look away now. Your mental performance is probably already on the wane. The speed with which people can process information declines at a steady rate from as early as their 20s.

A popular test of cognitive speed is the “digit symbol substitution test”. In this test a range of symbols are paired with a set of numbers in a code. Participants in the test are shown the code and given a row of symbols. They are then asked to write down the corresponding number in the box below within a set period of time.

There is nothing particularly challenging about this test. Levels of education make no difference to performance. But age does. Speed consistently declines as people get older.

It is not entirely certain why this is the case, but a range of theories have been put forward. One points the finger at something called myelin. Myelin is a white, fatty substance that coats axons, which carry signals from one neuron to another. Steady reductions in myelin as people age may be slowing down mental connections.

Another possibility is the depletion of a chemical called dopamine, receptor sites which decline in number as a person ages. 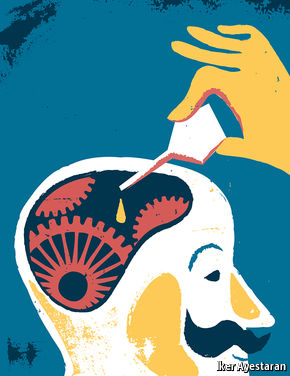 These reserves of knowledge increase with age and people’s performance on vocabulary and general-knowledge tests keeps improving into their 70s. Experience can also often compensate for cognitive decline. In a study of typists ranging in age from 19 to 72, older workers typed just as fast as younger ones, even though their tapping speed was slower. They achieved this by looking further ahead in the text, which allowed them to keep going more smoothly.

What does all this mean for a lifetime of continuous learning? It is encouraging so long as people are learning new tricks in familiar fields. “If learning can be assimilated into an existing knowledge base, advantage tilts to the old,” says Tim Salthouse, director of the Cognitive Ageing Laboratory at the University of Virginia. However, moving older workers into an entirely new area of knowledge is less likely to go well.

This article has been modified from the original article published in The Economist in January 14 2017.

The original article can be read here.

What could you income be in retirement?