How will Brexit reverberate in New Zealand?

OPINION: Make no mistake about it, Brexit is global news. But it plays out differently in different parts of the world and New Zealand is no exception.

Three ways in which it reverberates distinctively in New Zealand, and one for which there are obvious parallels.

1. Percentage-wise New Zealand has the largest population of British-born outside the UK (over 6%) and the fifth or sixth largest absolutely (Australia ranks first, then the US, Canada, Spain and possibly Ireland).

That means that the impact of Brexit – from the macro, the survival of the UK, to the micro, the fate of individual pensions – reverberates with added force.

Further the 60,000 or so New Zealand-born UK residents and the large numbers of Kiwis in Britain on working holidays and the like – an OE without London still being the exception not the rule –  means a menu of questions about migration and residency rights in the post-EU UK gets added to the mix. 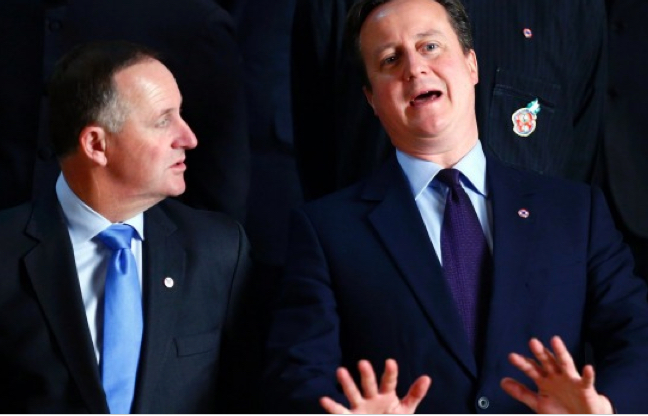 What are Key and Cameron discussing?

2. Despite generations of independence (choosing a date is a mug's game), New Zealand society and culture remain markedly inflected by the British connection, whether we think of the life of the mind (London Review of Books, Financial Times, Booker Prize), mainstream television (UKTV, Jamie Oliver, Bear Grylls), sport (English premier league) or the monarchy (mass circulation magazines). The conversation about Brexit will be amplified here, notwithstanding New Zealand is distant from the UK. It will be different in Washington DC, Tokyo, Beijing or Singapore.

3. In sharp contrast New Zealand's international relations are shaped primarily by worlds almost as far from Europe as is New Zealand itself. Depending on how the calculations are made the EU (the UK included) is a top economic partner, but 85 per cent of New Zealand's trade is not with the EU (for investment the EU is more significant, between 20 and 25 per cent). Flows of goods, services and capital link New Zealand most strongly to Australia and beyond that to the broader Asia-Pacific – the United States, Japan and of course China.  In an age of cyber-warfare and non-state armed force, defence and security are global, and the current preoccupation with the Middle East also brings New Zealand and the United Kingdom close. But Asia and the Pacific, where the United States and China compete, contest and sometimes collaborate, is central for New Zealand. Certainly Europe itself is not.

The New York Times Book Review for 24 June headlined 'why populism now?' If populism equates with 'conservative working class' the populism of Brexit voters whether measured by age (older), education (less) and income (less) was unmistakable.But the pervasiveness of such populism in the United States and mainland Europe suggests it has little to do with the UK's particular circumstances.

What about New Zealand? New Zealand's gini coefficient (index of income inequality) is approximately the same as the UK's. Criticisms of TPP, immigration and overseas investment are as often right-populist as left-socialist and collide with mainstream orthodoxy about the importance to New Zealand of an open economy, of immigration, of Asia. New Zealand's decision-making elite may not be as remote from the preoccupation of ordinary people as Britain's evidently is, and MMP allows a plurality of voices to be heard in politics. But the difference is not so great as to preclude a serious discussion (or the broadening of one) about the economy, social inclusion and democracy.

Read more about how the Lifetime Income Fund could be part of your retirement portfolio.

Malcolm McKinnon is a Wellington historian and is currently teaching on New Zealand's international relations at Victoria University of Wellington. His next book, The Broken Decade: Prosperity, Depression and Recovery in New Zealand, 1928-1939, will be published by Otago University Press in September.

This article was published in the Dominion Post on 28 July 2016. The full article can be read here.