Ahoy matey, your new retirement home is a cruise ship

Forget about moving closer to kids or into a retirement home. How about swapping your home for a smaller apartment so you could live aboard a cruise ship for most of the year?

While it’s not a common phenomenon among New Zealanders – wealthy North American retirees have been doing just this for years. Take Jack and Willi Ross who swapped their Vancouver, British Columbia home for life at sea, and an apartment to come home to between cruises. Their most recent journey? A 180-day trip with Oceania Cruises!

"The cost of living was, in some ways, cheaper," compared with home, said Jack Ross. The 78-year-old Ross said medical care, fine dining, laundry and internet service were included in his cruise fare.

The Rosses aren't alone. More people are cruising now than ever before, with 24 million passengers expected to set sail this year, compared with 15 million 10 years ago, according to the Cruise Lines International Association. About a quarter of those are 60- to 74 years old, and another quarter are 50 to 59.

What is it that mature travellers look for in a cruise?

In the first place, you want what all other cruisers do: the ease of having most of the nuts-and-bolts travel details worked out for you; traveling to multiple destinations while unpacking only once; top-notch pampering, service and excellent food; and the bang for your buck that cruising provides.

Depending on where you live and your financial situation, you may find living aboard a cruise ship makes financial sense when compared to other retirement living options.

Then there's the comfort factor on cruise ships. In addition to your stateroom, guests receive housekeeping services, entertainment and often educational programs. There's often 24-hour meal service and there are inclusive amenities like fitness centres and pools.

A round-the-world reservation on Princess Cruises, for example, averages $203 per day to visit 41 countries in 104 nights on the 5-star Sea Princess according to global cruising specialist Kelly Richards, Team Leader of the Flight Centre’s Cruiseabout office in Ponsonby, Auckland. “Retirees say it is cheaper to cruise than to pay rent and living expenses. Being all inclusive, and with living costs increasing all the time cruising is definitely becoming more affordable.”

Interest in cruising is growing and with more cruise ships coming to New Zealand, Cruiseabout are finding a growing number of people booking Round-The-World cruises. Richards has noticed many of these are retired couples, individuals who have recently lost a partner or kiwis who simply want to splurge while they’re still fit enough to enjoy the wide variety of destinations cruising offers. “I can see the attraction. You have the crew looking after you, wonderful meals and great entertainment – while someone else makes your bed every day."

The crew as family

Many guests also value the relationships they develop with crew, who remember their names and offer personalized attention. Feeling like you’re a member of a “village afloat” is a big plus for retirees who may otherwise be living alone at home.

And when it comes to a very lengthy cruise, long-term guests can also persuade a cruise line to let them bring their own furniture or decorate their cabin at their own expense. They can also negotiate better prices if they book in early with their agent.

But is life at sea really for everyone?

There are a few questions you’ll need to ask yourself…

Can you afford it?

Those considering life at sea need to make sure their budget fits.

"You need to be able to afford it. Cruises can be surprisingly cheap if you are willing to book well in advance and move from ship to ship,” said Carey Church, Authorised Financial Adviser and Director at Moneyworks NZ Ltd. “Cruising doesn’t suit everyone, but you’re not going to do this because it’s economical. It’s because it’s a lifestyle you want.”

Is your health up to it?

You should also consider your health before long-term travel on a cruise ship, despite some lines offering well-equipped medical centres with doctors and nurses on board, Richards said.

She recommends working with an experienced travel agent to find the most suitable option based on price, amenities and your specific interests, while Carey Church suggests "practicing" the cruising lifestyle before diving in full time.

The Rosses said they arranged for their accountant to intercept mail and bills while they were gone, disconnected their television cable and telephone services, and reduced their collision auto insurance to third-party liability. Friends visited their home to check things are in order and watch the property.

"You just bring your suitcases and unpack them. It's like living at home, but I don't have to worry about renewing my driver's license," he said. 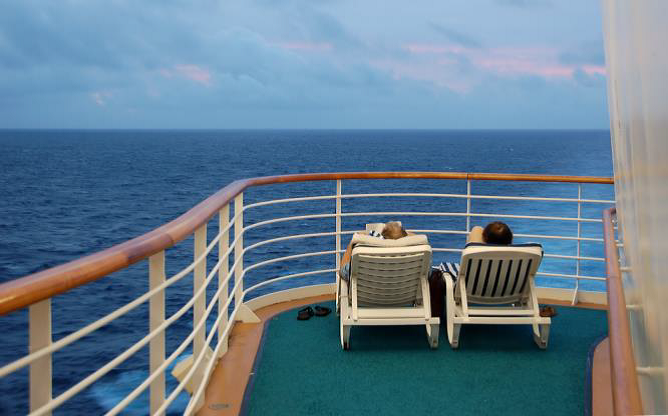