Retirement has become an outdated concept ...

Retirement has become an outdated concept for 140,000 New Zealanders who have reached 65 and are still clocking in to work.

And those in the workforce face a future without the dream of long holidays and time on the golf course, with just one in five people working today expect to retire by 65.

It is 17 years since compulsory retirement ages were banned by the Human Rights Act. In that time, older workers have trebled from 9 per cent of men aged 65 and over to 27 per cent.

Women in paid work aged 65-plus have leapt five-fold from just 3 per cent to 17 per cent.

The "young old" aged 65 to 69 are now more likely to be still working in New Zealand (39.6 per cent of them) than in 30 out of 34 OECD countries, beaten only by Iceland, South Korea and Japan.

Almost a fifth (19.5 per cent) are still working in their early 70s, higher than in all but four countries.

"The word 'retirement' doesn't have any meaning for a lot of people any more," says Dr Susan St John, 71 and still director of Auckland University's Retirement Policy and Research Centre.

"The old idea that you get your gold watch and put your slippers on, play golf and get up late is no longer realistic."

A combination of factors - financial necessity, better health and dramatic changes in the nature of work - make the era of retirement by 65 look like just a short-term blip in human history.

Read how you can secure your future retirement income today.

Secure Income for the Future

Find out more about structuring your retirement income.

Dame Cath Tizard passed today's retirement age 20 years ago but has barely taken her foot off the gas.

The former Governor-General and Auckland Mayor is 85 and still has much on her plate to keep her busy, whether it's the many campaigns and commitments she has been involved with or giving public talks as she did as part of the Royal New Zealand Navy's 75th Anniversary celebrations this week.

Just two years ago she was overseeing the Glenn Inquiry into domestic violence. "If you've got any get-up-and-go, you can always find something to do - there are plenty of voluntary jobs out there."

Dame Cath admits she never had a game plan for retirement. "I'd never given it much thought because my last two jobs had finite terms. So what do you do next? You wait and see what comes up."

Last month Dame Cath was at Auckland University for the graduation of her grand-daughter Jacqui, 21. Like many young people, thoughts of financial security by the time she hits today's retirement age in 2060 are the furthest thing from her mind.

"I'm more focused today on just finding a job and figuring out what I want to do with my life."

The science graduate looks to her grandmother and hopes she also has passions that will keep her engaged post-retirement. "I don't really see a joyous retirement where you reach a certain age and stop working," she said.

"I'd like to be active, healthy and happy - even if it means I stay working when I'm older."

The world in 2060 is almost unimaginable for today's graduates. There are jobs to get, partners to meet, weddings, children and a world getting smaller by the day.

It looks increasingly certain that "retirement" will be a quaint notion they laugh about as they tell disbelieving children it was once what everyone did.

For thousands of years, people of all ages worked together in hunting, farming and domestic work as long as they were physically capable.

That legacy still lingers in our farming sector. Dr Michael Cameron of Waikato University says it is the only industry whose share of employment in every age group above 55 is above the national average, rising from 7 per cent across the whole workforce to 35 per cent of those still working at 85 or over.

Formal "retirement" arrived with the industrial revolution, as older workers could not keep up with machine-driven work and were pushed out.

The welfare state was created to support them, reaching a high-water mark in 1977 when Sir Robert Muldoon lowered the pension age to 60. But the tide turned only eight years later, when Labour imposed a surtax on pensioners' other income which lasted until 1998. The qualifying age was raised gradually back to 65 by 2001.

An online survey by the Retirement Commissioner suggests we will soon be working even longer. Only 21 per cent of those who have responded so far expect to retire by 65, 30 per cent at 66-69, 39 per cent at 70-75, and 10 per cent at older ages. 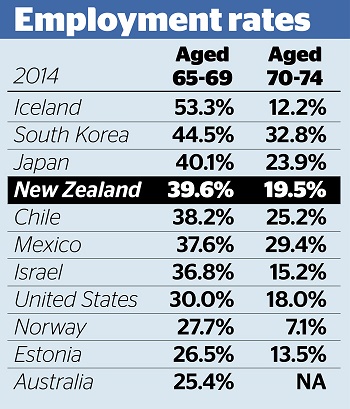 A Massey University study of people aged 61-77 in 2013 found 45 per cent of those still working agreed, and 43 per cent disagreed, with the statement, "I continue to work because I cannot afford to retire".

Most older people still own their own homes, but homeowners have shrunk slightly outside Auckland from 78.6 per cent of the 65-plus group in 2001 to 77.4 per cent in 2013, and more sharply in Auckland from 72 per cent to 67.3 per cent. Even heavier falls at younger ages mean growing numbers in future will still be renting in old age.

NZ Super pays $592 a week after tax for couples and $385 for a single person living alone. The mean rent in Auckland in April was $509 a week. "People continue working because the pension isn't enough to live on," says study leader Professor Fiona Alpass.

Secondly, as Professor Peggy Koopman-Boyden of Waikato University puts it: "They are working because they can. There is no longer anything legally that says you have to retire at 65."

And the vast majority are healthy enough to keep working.

NZ Health Surveys show that 88.5 per cent of people aged 65-74 now rate their health as "good" or better, virtually equal to the average for all adults (88.9 per cent).

Better health means we are living longer. A man reaching age 65 in 1952 could expect to live until 78; his grandson aged 65 today can expect to live to 84.

Most machine-driven industrial jobs have either been automated or moved offshore, and most jobs are now in services. They are also increasingly part-time and contract-based.

"There are fewer physically demanding jobs now, so people can work longer," she says. "It's now possible to have a kind of portfolio of jobs after 'retirement'."

Thirdly, people are staying in work longer because they want to. Forty per cent of people in the -Retirement Commissioner's survey say the main reason they will keep working past 65 is "value and satisfaction from work".

A Social Development Ministry survey of 65-year-olds in 2009, which let people choose multiple reasons they were still working, found the top four reasons were: "liked being busy" (92 per cent); "liked their work" (91 per cent); "felt they had something to contribute" (90 per cent); and "liked contact with other people" (83 per cent).

"Needed the income" came a distant fifth at 64 per cent.

Koopman-Boyden says she still researches ageing in her 70s because she enjoys offering her expertise. "It gives me a feeling of being useful and contributing to society."

It is hard to see a reversal of any of the factors driving people to work longer. "I think we are all going to work till the grave," says Alpass.

But she adds: "For some people, it hasn't [changed]. For people in low-skilled or highly demanding or not particularly fulfilling work, retirement is something they will look forward to, and for a lot of people it's a step up in income. They might have been made redundant in their 50s and not been able to get employed again, so getting National Super is a pay rise."

In other words, the income gaps that have widened in youth and middle age over the past 30 years may widen further as people in well-paid skilled jobs keep earning well into old age, and those who have struggled on lower incomes may have to survive largely on Super.

Increasingly, KiwiSaver will provide a little extra. But people would need to save more than $200,000 to yield a retirement income of $200 a week on top of Auckland rents (see box at right). 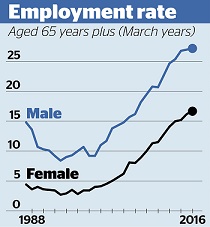 She favours shifting to standard rates for each individual, partnered or single, and reducing inequality by taxing superannuitants at 39 per cent on income above $15,000 a year.

"It's not like the old surcharge, which gave you very high and arbitrary effective marginal tax rates. It's a more sophisticated way of clawing back from the top 10 per cent or so," she says.

Older people should be able to do a mix of paid and unpaid "work".

"We have heard that 46 per cent of traditional jobs will disappear in the next decades [through technological change], yet we need important work to be done, whether it be in the environment, education or healthcare," she says.

"We have to make sure older people are supported well enough to do whatever they feel is their calling."

This article was written by Simon Collins and published in the New Zealand Herald.